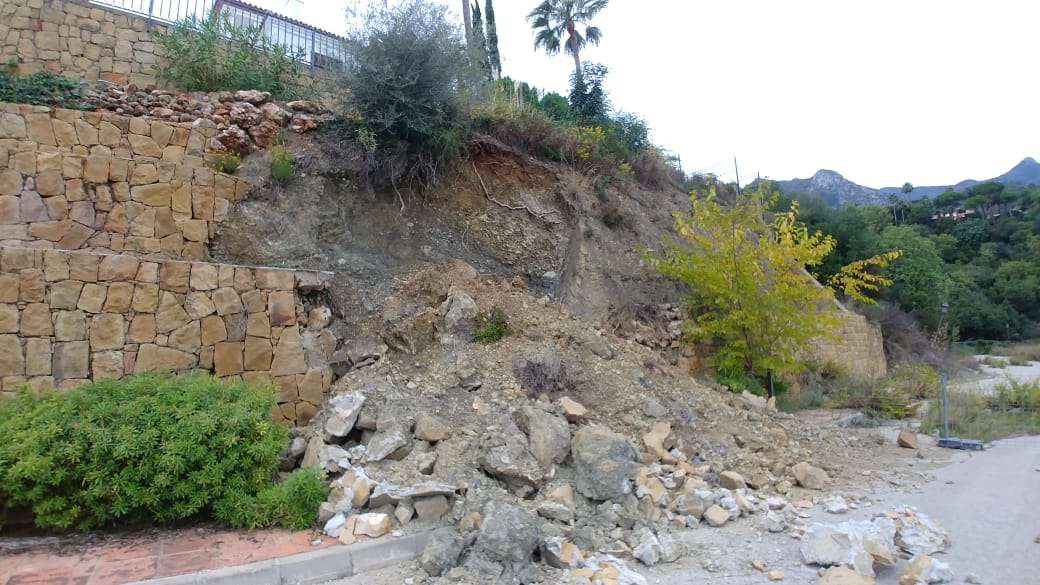 This wall was built very poorly by the constructor of the villa in Sierra Blanca, Marbella. The wall was of insufficient strength to be able to support the weight of the terrain and the pool above it.

The rains were torrential, above the normal average, but a structural wall should be strong enough to support it.

If you need help with constructing a retaining wall that won’t collapse, contact us today.

A before and after picture of a swimming pool tiling & renovation project in Mijas.

In the before picture, the pool doesn’t really look that bad, but it was a very boring colour of blue, with the stereotypical dolphin and Greek key border. There was no personal touch, that the clients could be proud of.

The pool was leaking through the pipe in the base of the pool. Excavation of the terrace to get to the pipe was impossible, as the terrace is stamped concrete and difficult to repair. However what made the work impossible (without tens of thousands of euros) is that the pool is supported by a retaining wall 5m high, on top of which is a concrete ring beam and then the terrace. Excavation in this area would have disturbed the ring beam and the retaining wall.

Instead, we re-purposed the hoover pipe to give a working drain. The pool can be hoovered using the skimmer, so not a problem. We did suggest that the most economical option would have been to simply block the drain off, but as the owner wanted to tile the pool to his liking, it made sense to make the repair.

The tiles chosen are a beautiful turquoise glass mosaic. 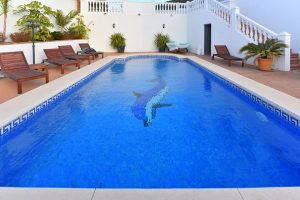 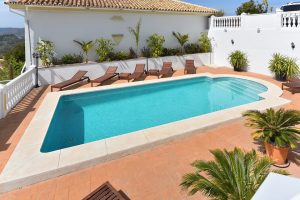 To discuss your pool and building in Mijas, contact us today

After the building works have been done, a mural can give life to an otherwise boring, small or unusable space. Plain solid colours sometimes just do not have the required impact. Other tricks can be used to make the best of an unusable space, such as mirrors, hidden lighting, but sometimes these are just not practical.

Decorative painting can be used inside, such as this superbly executed faux marble effect on a plaster fireplace. This was completed by our friend Michele Duffy in a couple of days. 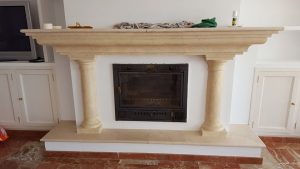 Decorative painting on a fireplace in Marbella 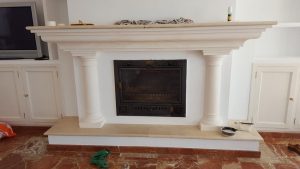 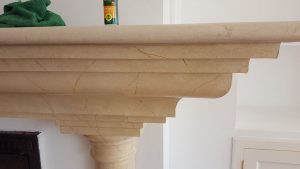 This example, also by Michele Duffy, was a mural painted on a 2 storey high retaining wall at the back and side of the house. It gives much needed interest and depth to a difficult space, but without the need for caring for plants or other maintenance. 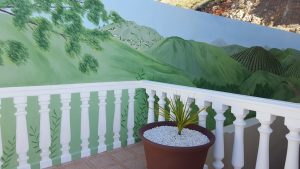 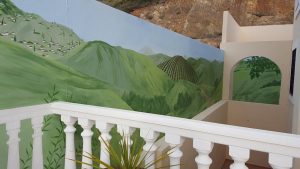 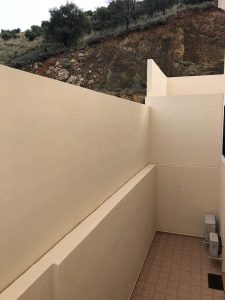 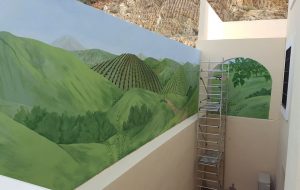 Our approach to building works is to find solutions that suit the needs and budget of the clients, to create a space that is personalised to your needs.

For a quote for your building works in Marbella, Fuengirola, Mijas and Estepona, do not hesitate to contact us.

Due to poor quality of building this garden wall became dangerous, showing huge cracks. It was about to collapse into the street. Once we started to demolish the wall, we found that there was nothing supporting the terrace and the wall had no reinforcing. Inside the terrace the wall is around 1.60m high, but out in the road it is just under 2.5m high, so if it was to collapse it could do significant damage, injure someone, or block the road.

The wall had cracks and would have eventually failed but the damage was aggravated by heavy rain at the end of 2016. The torrential rain flooded the terrace, then washed out the earth from underneath. If the wall had been built properly in the first place, this would not have been a problem.

We will completely demolish the wall, pour new reinforced concrete foundations and then rebuild the wall. The terrace will have a new concrete slab poured with the correct steel reinforcing and drainage points put in.

We will then tile the terrace in non slip tiles (essential in a swimming pool area), leaving it looking like new.

If you have walls with cracks, it is best to have them looked at by a professional builder before they become dangerous. It is possible that the damage can be halted, or underpinned, saving money. 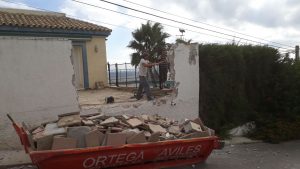 Demolition and build of a garden wall, Estepona, Malaga 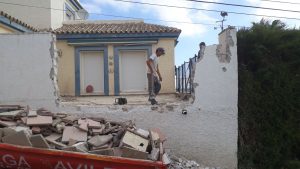 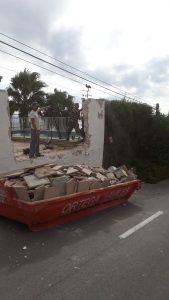 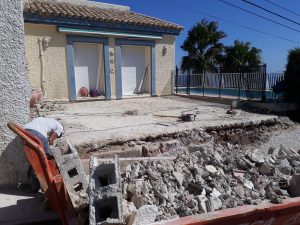 New wall to be built in Estepona